This article zooms in on LCR components uses in passive crossovers. In a passive speaker crossover you use three passive components, an inductor, a capacitor, and a resistor, also called LCR components. They are called passive components because they do not require a power supply to operate, in contrast to active crossover that requires a separate power supply. LCR components are the three most important passive components. Within an AC circuit, they form the basis for almost every circuit you can think of. In audio circuits mainly for filtering, coupling, and disconnecting signals. An electrical signal is an alternating current (AC) and can be filtered based on the desired crossover frequency to separate high and low frequencies. Apart from a very good full-range driver range, there is almost no driver that can reproduce the entire audio spectrum from 20 Hz - 20 kHz without distortion at the same sound level. That is why you cannot avoid a crossover in most speaker designs. So we call them passive components, but do they really behave passively when we use these components in audio circuits? Also, which components should you choose, and what makes them ideal to use in your passive crossover filter? The following paragraphs explain the basis of each component and we try to answer the above asked questions. This article does not show you the best brand or component. This differs in every design, however, the following basic information could help you make a good choice for using the correct components in a passive crossover.

Capacitors are components that can be considered as frequency-dependent resistors. This component consists of two insulated conductors (also known as plates/electrodes) that are separated next to or opposite by an insulation component known as a dielectric. This is a material that does not conduct electricity. Capacitors are named after their dielectrics such as ceramic capacitors and electrolytic or polypropylene capacitors. 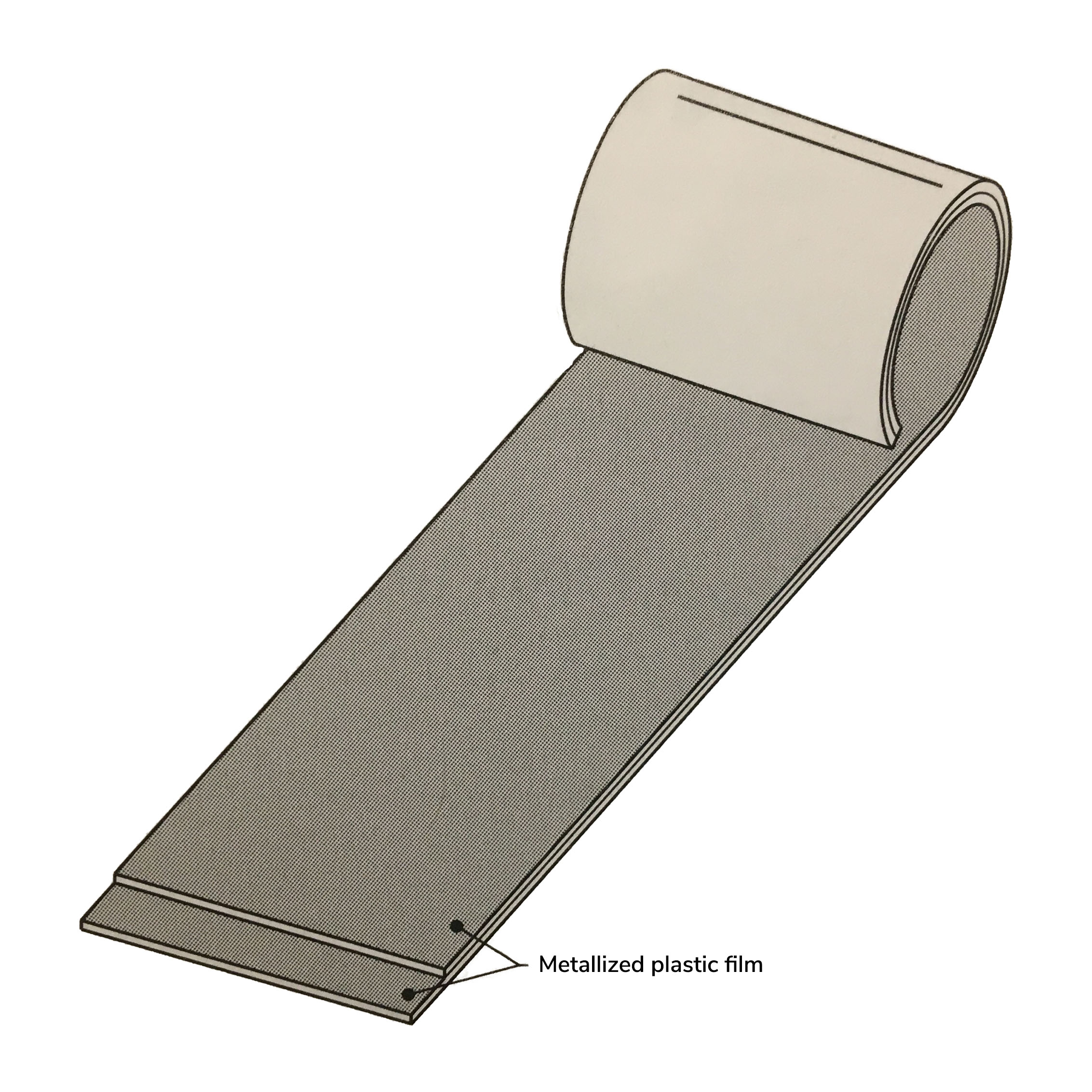 The capacity of a capacitor is called farad (abbreviated to F) and has the capability to store electrical charge. Like an inductor, the unit farad is very high in audio applications and we use smaller units.

Because alternating current increases when capacity and/or frequency is increased, we can then say that the resistance becomes smaller. This resistance in a capacitor is known as capacitive resistance (Xc), also called capacitive reactance.

There are basically 3 types of capacitors based on their structure; film capacitors, ceramic capacitors, and electrolytic capacitors. In crossovers, we mainly use film/foil and electrolytic capacitors, as not every type is suitable for audio applications. Dielectric, voltage values (voltage rating), and capacity are the most important aspects. The capacitor capacity depends on three factors; the surface area of the electrodes, the distances between the electrodes, and the value of the dielectric used. To increase the capacitance, the surface area of the conductors needs to be increased and the distance between them reduced. This is often achieved by applying the conductive material to a thin insulator (the dielectric) and rolling it up. Examples are the cylindrical capacitors where the film/film conductors are rolled up such as Polypropylene, Metalized Polypropylene, and Non-Polarized/bipolar electrolytic capacitors. There are different voltage values for each type of capacitor series such as 63V, 100V, 250V, 400V, 630V, etc. This is an important factor because the dielectric can be decisive when the voltage is too high. Furthermore, the capacitor capacity is not stable at varying temperatures. This can differ per type and is a factor to take into consideration. With capacitors, 1% tolerance is preferred, however, 5% tolerance does not detract from the capacitor quality. Find the whole range of capacitors that SoundImports offers here.

Due to its frequency-dependent resistor characteristic, an inductor offers more resistance at high frequencies than at low frequencies. An inductor is no more than a wrapped enameled copper wire (lacquered wire) winded around a core. The core can be either a ferrite core, an iron core, or an air core, which is just an empty hole. A coil can filter out high frequencies and works in fact the opposite of a capacitor. The property of an inductor is the inductor constant which is the coefficient of self-induction, indicated in the letter L and measured in the unit henry (H). It indicates the level of self-induction in the coil. Often used in smaller units.

Basically, an inductor works the opposite way of a capacitor. An inductor stores energy in the magnetic field. This energy is released again when the current through the coil is interrupted. The speed at which the current through an inductor changes depends on the voltage across the inductor. When frequency increases, the magnetic field in the coil will change more often per second between the north and south poles. The current (or magnetic field) increases and decreases faster. The self-induction voltage, which counteracts the current, increases, and therefore the inductive resistance becomes bigger. Inductive resistance, therefore, depends on:

Conclusion: Due to its frequency-dependent resistance characteristic, the coil offers more resistance at high frequencies than at low frequencies. As a result, it is also used in a crossover to filter out high frequencies. The formula you can eventually use to come to the right induction is as follows: L = Xl / (2 π f)

The structure of most coils intended for crossover use thus consists of enameled copper wire. A ferrite or iron core increases the induction capacity, contains less copper wire than air cores of the same value, and produces less direct current resistance. Less copper wire often results in a lower price. There are also "more luxurious" coils such as foil coils, waxed Litz wire coils, and toroidal core coils. Each with its own specific characteristics. With coils, there are different gradations in material use and type to define stability and value. Temperature processing and power handling play an important role in this. In the end, the tolerance percentage determines how close the measured value eventually is to the specified value and how precise your final circuit will be. If you want to get close to your calculated value, choose 1% tolerance. A coil with a 5% tolerance does not affect the quality, only the actual values deviate more. Both a capacitor and an inductor are the most important components in a crossover design, but both in different ways. Coils do not change the audio signal as in 'color'. Capacitors are more sensitive to this. The important aspects when choosing a good inductor are more about power handling and the type of coil. When the quality of the material and the position of the coil are good, an inductor in relation to a capacitor will not affect the signal.  Placing an inductor correctly (at the right angle to each other) will prevent crosstalk and noise. So far the basic principles of a capacitor and an inductor. A capacitor in combination with an inductor in a crossover filter shows a phase difference between voltage and current, they are so-called reactive. The behavior of an inductor in combination with a capacitor varies in time and is a separate chapter. This is not discussed any further.

Find the whole range of Coils that SoundImports offers here.

Find the whole range of resistors that SoundImports offers here.

Overall the resistor is the most basic component and the ohmic resistance value and power rating are the most important specifications. Even with a resistor, the tolerance percentage determines how close the measured value ultimately is to the specified value. Choose 1% tolerance if you want to be exactly right. Choose 5% if the value is less important. Returning to induction in the case of a resistor. In practice, ideal components are not ideal and a small induction also occurs with resistors. Induction affects the signal and to prevent this there are bifilar wound resistors. Examples are the Mundorf MRES series and Dayton Audio Precision Series. These resistors often have a very low-temperature coefficient and a very low induction.

It even appears that the choice of the passive component may have as much effect on the overall sound quality as the circuit design itself.

Does it matter which brand and type you choose? Yes, and there are plenty of articles on this subject that show the differences audibly and on paper through extensive tests. Even then it is subjective. Overall, for someone who is just starting out, you will get an overall improvement when a lot of attention is given to the type of crossover and the type of components. Find the whole range of Crossover components that SoundImports offers here.

Get to know more about the best power amplifiers. SoundImpress offers high-quality, durable amplifiers with European components and a 5-year warranty.

Building your own sound system is great to do, but it also shows that you love to listen to music. We have worked with our customers to compile a list of the best Audio Test Songs. To make your set perfect, you need to do a lot of testing. Good Audio Test Songs are necessary for this process.

One of our valued Youtube partners build a DIY 5.1 surround sound system and an 'invisible' TV build by the famous youtuber DIYperks. With his amazing channel is he having over 4 million subscribers and we are proud to supply him with speakerbuilding components

SEAS had earned a reputation for building some of the most high-end quality drivers available on the market today. This Norwegian-based company also has developed its own kit plans for you to build. In this blog, we are highlighting some of these DIY plans with a parts list for the drivers and crossover parts that you can use to start your own project!

When purchasing a desktop audio stack, it is usually important to match the synergy, tonality, and performance of audio decoders and amplifiers in order to achieve the highest possible performance within your budget and your audio output. To assist you to find the appropriate stack for your speaker systems, SMSL compiled two high-quality desktop stacks that include the latest and most reliable HiFi DACs, headphone amplifiers, and power amplifiers!

SoundImports and third parties use cookies on this website. By clicking "Yes, I agree 🔉;" you agree to store cookies on your device to improve website navigation, analyze website usage and help our marketing projects. If you give us permission, we use your personal data for personalized and non-personalized ads. Want to know more? Read all about our cookie policy here. If you choose to decline, we will only place functional cookies.