Are you a business buyer and are you interested in higher quantities? Contact us via this form and receive a tailor-made offer. Let us know in the field below what numbers you want, whether this is a one-off and what your application is. We will respond within one business day.

Quote request has been sent!

Do you have a question about this product?

Our employee is happy to help you find the right product

Ask a question about this product

Your question has been sent

We will get back to you as soon as possible with the correct answer.

The DAX66 from Dayton Audio is an affordable, full-featured, six-source, six-zone distributed audio system. Enjoy music distributed throughout your home, and control it with convenient in-wall keypads or wireless remote control.

Total Connectivity, Both Virtual and Hardwired

A DAX66 true matrix system allows a listener in any zone to select from any of the six connected source devices. Four stereo RCA inputs connect any audio or audio/video device like a radio tuner, CD player, Blu-ray DVD player, or satellite/cable TV receiver. Two stereo 3.5 mm jacks are available to connect a personal audio device or PC. Input six is a shared connection that provides a connection for either a Toslink optical cable or a 3.5 mm stereo audio cable.

Each zone is controlled by a dedicated in-wall keypad with back-lit soft-touch buttons and LED display. This keypad changes the source, volume level, bass, and treble. When a zone is not active, the power/select button emits a soft blue glow. A built-in IR receiver performs double duty by providing zone control via a DAXRC remote control, along with control of the source devices by using the built-in IR extender. Six in-wall keypads and wall plates are included.

Control is Nothing Without Power

If you're installing the DAX66 system in a large home or office, you can connect up to two additional systems to the basic system. The additional DAX66 systems share the six source devices and distribute the audio to a maximum of eighteen zones. Each zone has a stereo pre-amp output for connection of higher-power amplifiers to fill larger spaces. Connect a Dayton Audio MA1260 or MA1240a to a pre-amp output to extend a single zone to seven zones. Control the power state of the attached amplifiers by connecting them to the DAX66's trigger outputs.

The Fine Print…and It's All Good: 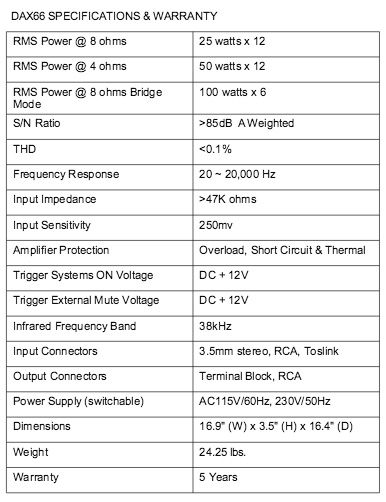 The DAX66 provides six stereo, unbalanced, line level PRE-AMP outputs, which correspond to the six-zone outputs. The PRE-AMP outputs can be used to connect powered subwoofers to a zone or additional amplifiers to expand the available power in a large zone or multiple zones.

The DAX66 can be used as the master controller in large commercial audio systems with constant voltage 25/70V amplifiers connected to the PRE-AMP outputs.

The PRE-AMP output levels are variable and are controlled from the DAX66 keypad, Infrared remote, or RS232 from an automation system. For best performance, the PRE-AMP output cables should be less than 25 feet long and be high-quality, shielded cables.

Connecting Source Components to the DAX66

The DAX66 provides six source inputs that can be accessed by any zone. Inputs 1-4 are stereo, unbalanced, line level source inputs via RCA style female connectors. Input 5 provides a connection for a personal audio device or PC sound card via the 3.5mm stereo jack. Input 6 provides one S/PDIF input for CD, DVD, cable, or satellite box via the Toslink jack, as well as a second 3.5mm jack.

The 3.5mm stereo jack on input 6 takes priority over the Toslink connector. Do not connect cables to both the Toslink and 3.5mm jack at the same time.

Expanding the DAX66 to 18 zones

The DAX66 can be expanded to 12 zones with one additional DAX66 kit and to 18 zones with two additional DAX66 kits. Stack three DAX66, one on top of another. Connect the included 18-pin ribbon cable to the EXPANSION OUTPUT terminal of the bottom unit and the other end of the ribbon cable to the EXPANSION INPUT terminal of the second and then third unit. Set the MASTER/SLAVE-1/SLAVE-2 switch of the bottom unit to MASTER, the center unit to SLAVE-1, and the top unit to SLAVE-2. The following data and control is transmitted between the three units; all source audio, all RS232 control data, and all MCU communication data. 0 reviews
0 from 5Based on 0 reviews
Review this product

There are no reviews written yet about this product..

SoundImports and third parties use cookies on this website. By clicking "Yes, I agree 🔉;" you agree to store cookies on your device to improve website navigation, analyze website usage and help our marketing projects. If you give us permission, we use your personal data for personalized and non-personalized ads. Want to know more? Read all about our cookie policy here. If you choose to decline, we will only place functional cookies.